So, I said a while back that Id take pictures of my cosmetic gear and stuffs for all of you to see. I have done so! 21 outfits, to be exact. Im sorry, but when I took the pics, I was in a bit of a rush. So, if one isnt up to your code of what makes a great screenshot, Im sure there are better places for you to go to find some. All pics will be at the bottom of the blog.

So, originally, I misread the dates for the anniversary event. When I thought it said the event was ending on the 21st, what I was really reading was that the 100% boost to XP would be ending on the 21st. The event itself was going to end on the 30th. This ended up being extended to the 6th of this month due to some stuff that prevented people from playing the game.

One of the things that got me way excited was that along with the extension, they said they were going to toss into the event some brand spankin new items! Now, saying this excited me is an understatment. I was WAY over the top wanting some new cosmetics like, yesterday, you know? So, the day the new items went live I went to the Game Master with all my saved up tokens hoping to get some cool new stuff but was disapointed to see that the things added werent new at all. All the "new" items were, were old items with new color schemes. So, my excitement was certainly smacked down ever so slightly.

During the event I managed to get every single item available to earn. That was the most exciting part for me. I got all the outfits, all the maps and all three horses. Thankfully, it was during this time that I learned of another difference between DDO and LotRO. On LotRO, you can use currency earned in game to upgrade your bank space. As you can imagine, this was a very, very helpful thing as there were quite a few cosmetics and map pieces.

Overall, I found my very first LotRO Anniversary event to be alot of fun. My favorite part was when the Bree Town Firework Event would begin and seeing around twenty players send up fireworks against the night time sky. I tried to grab a screen shot of this but unfortunatly I have bad timing so I wasnt able to get any. But it was a really pretty sight.

Now that its over, Im looking foward to getting back to playing with the ComicRelief. I took a total of two weekends off of playing with him to complete the event plus another weekend off so I could spend time with one of me big bruvvas before he deploys. However, Ive read rumors about another LotRO Festival coming up soon, but hopefully it wont be TOO soon. Dont need Comic thinking Ive completly ditched him, now do I?

So, after playing on Rayneblood to a decent level, Ive had a blast playing on her. If you people dont remember, Rayneblood is my clone of Mr. Geoff Hannas Knicker character build. However, Ive reached a point where I dont feel like its a build I can be successful on. Im thinking, right now, that Im going to scratch her and remake her as a fighter instead or just remake her as a pure barbarian. With clothes! It is a cool build and Im sure that if I had the patience to level her crafting, Id be alot better on her. But DDO crafting is a pain in the ass, to put it simply. How any of you have managed to "get it", is certainly beyond me. So, congratualtions on doing that!

Real quickly, Id like to say a quick thank you to Mr. Geoff Hanna for making up the awesome character build many moons ago giving me the inspiration to give it a shot. Also, thank you for the help when I asked questions!

On an added note: Congratulations to Mr. Geoff Hanna and his Gamer Girl for getting engaged! Try to wear more than just starter rags to the wedding, eh? ;D

Boys Can Be Dumb.

Really, really, really friggin dumb! Firstly, I think Ive made it clear in the past that I dont generally like being flirted with. Now, Ive play flirted but generally that only happens when A: Ive had some amount of boozey or B: Its someone Im comfortable with and knows that its just play, not serious at all.

Well, a few months back, this guy started flirting with me. I ignored it figuring hed stop at some point if I didnt react to it. Only problem is it didnt only do absolutly nothing to stop it, it seemed to make it worse. He became more forward and even added a creepy factor by constantly using the hug, kiss and even the sleep emotes on my characters. So, fed up, I finally, politly, asked him to stop.

A week passed without him doing anything. Then out of the blue, BAM! Right back at it. This time around I felt it was needed for me to put my boot down and say no more of this nonsense or Im gonna stop talking to you as I didnt feel like I should have to explain that I didnt like it yet again, you know? This essentially made him stop talking to me as a whole. Which was fine.

Then, I wrote my "Need To Speak" blog(which seemingly created a(ever so slightly) hilarious amount of drama). He pops up, again, out of the blue, and tells me that we cant be friends anymore because we have different political views. Now, this is just dumb because Ive known plenty of people who think differently than me politically and who, themselves, know people who think differently. We're no less friendly with each other because of our differing views. But, you know, whatever. He made it even sillyer by delivering it to me in the form of a break up line. Like, you know, the kind dating couples use.

I laughed. Shrugged it off. Moved on. But then he said something to someone else that caught both my attention and anger: "True friends stick together no matter their differences of opinions or views." I think most anyone can figure out why that brought a bit of anger to me. To those that dont: Its a little thing called hypocrasy. If theres anything I hate more than most things, its a hyprocrite. I hate them with a passion. But, hey, if thats the way he wants to be, fine by me. So long as hes never in the same room as me, he wont have to worry about me taking swings.

Right! Sorry about that. I needed to get that off my mind so I did. Now its no more! Its free like a bird! flying away into the sunset never to return to bother me again! Yup!

So, anyways, We've reached the end of my blog because I forgot what else I wanted to write about. So that means its picture time! Now, like I said in the beginning, the pictures arent perfect. But theyre good enough. I put them here at the end because, well, theres alot of them. 22 to be exact. 21 outfits and 1 really pretty scenic picture I took from within LotRO. So, sit back and get your scroll finger ready cause here we go! 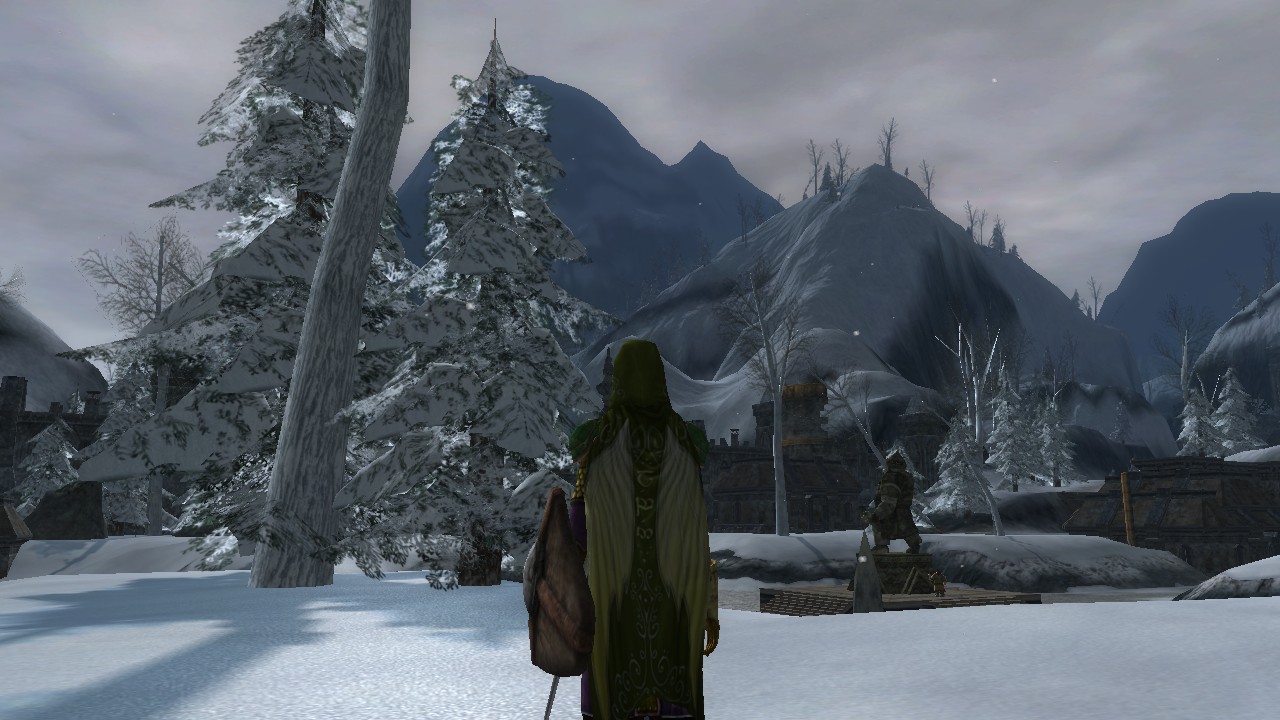 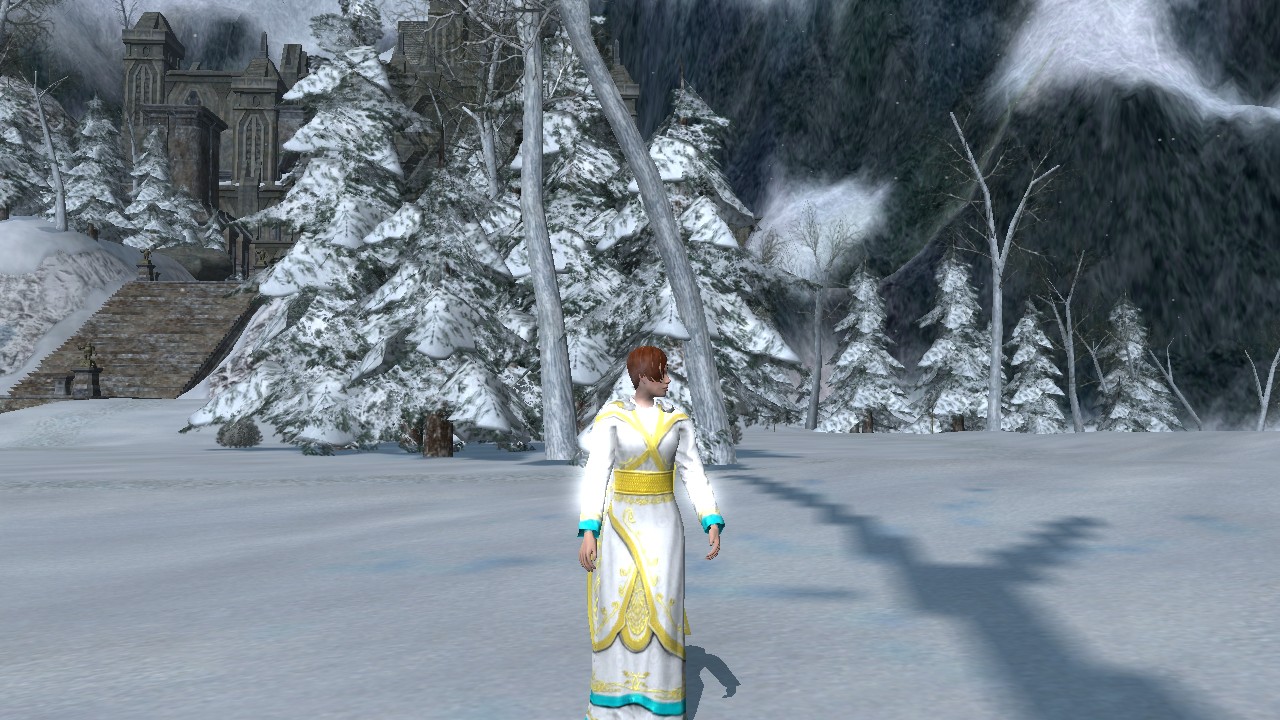 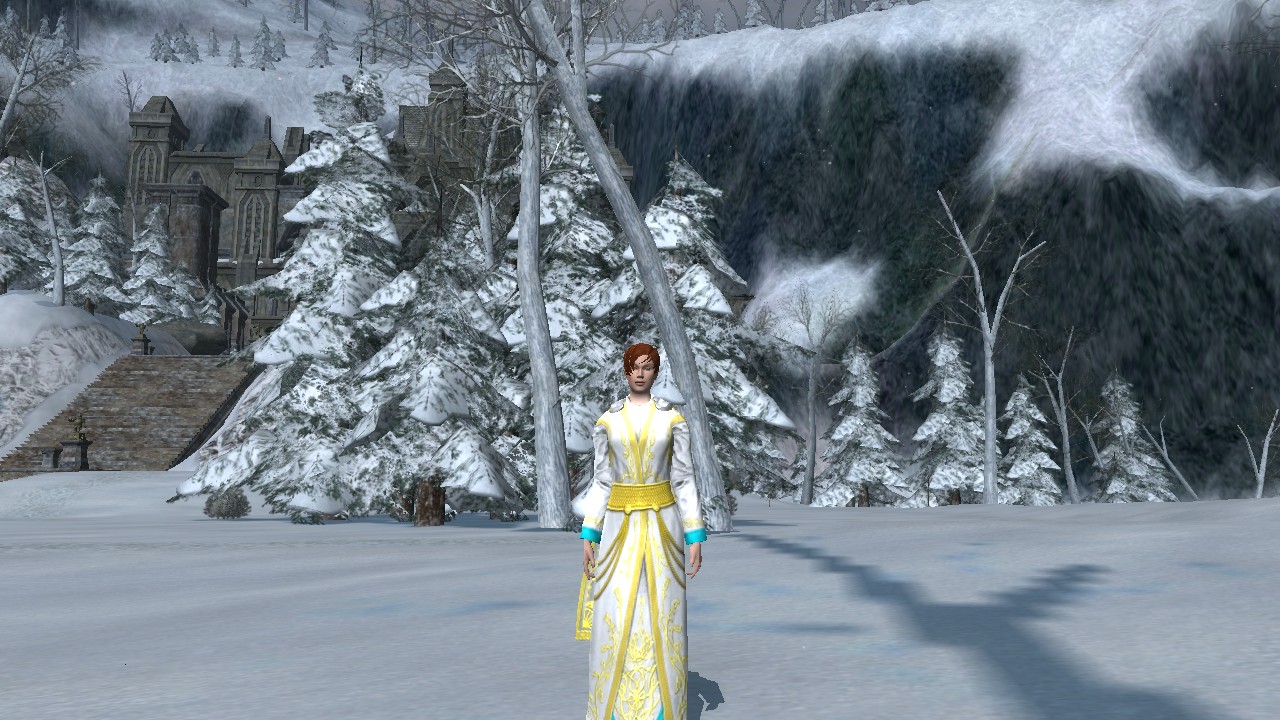 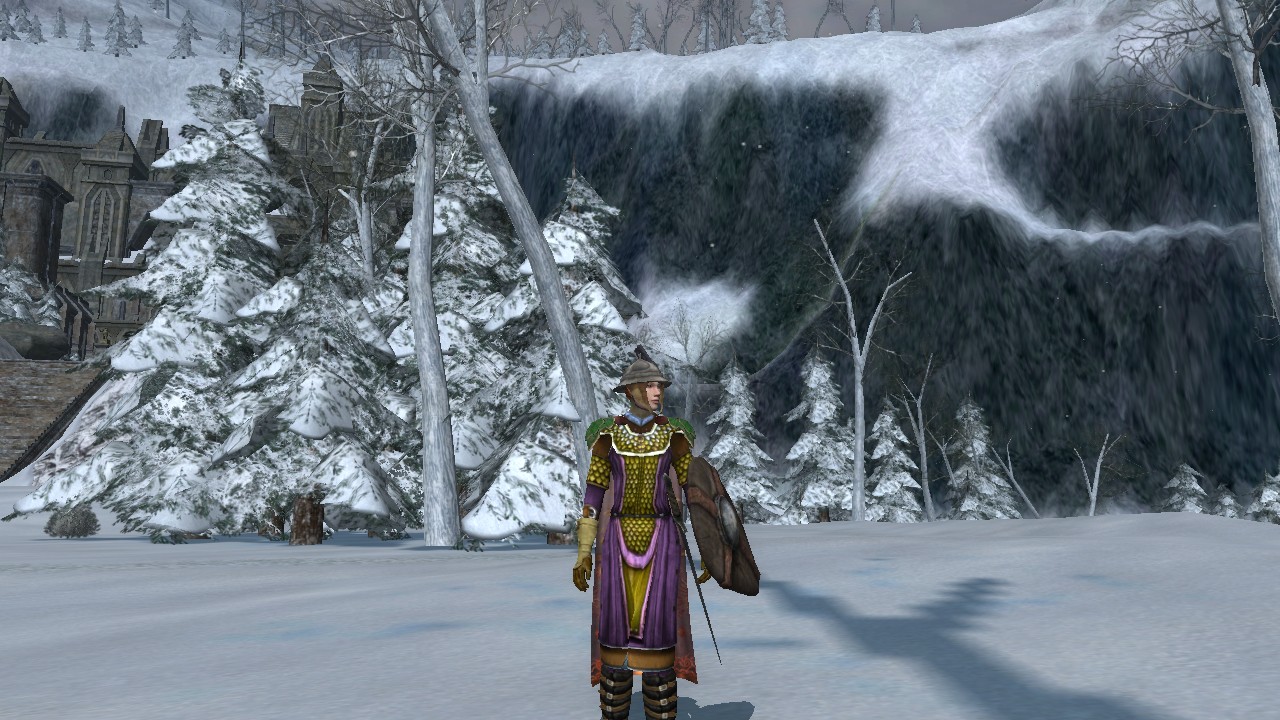 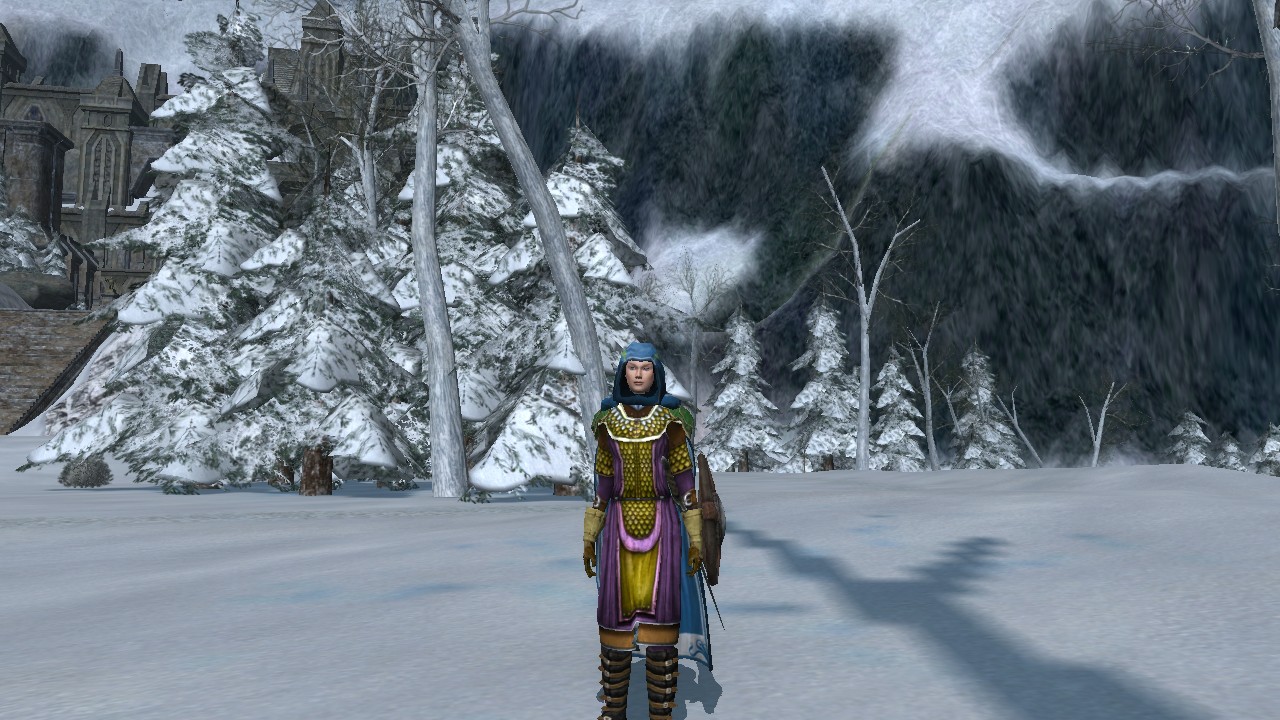 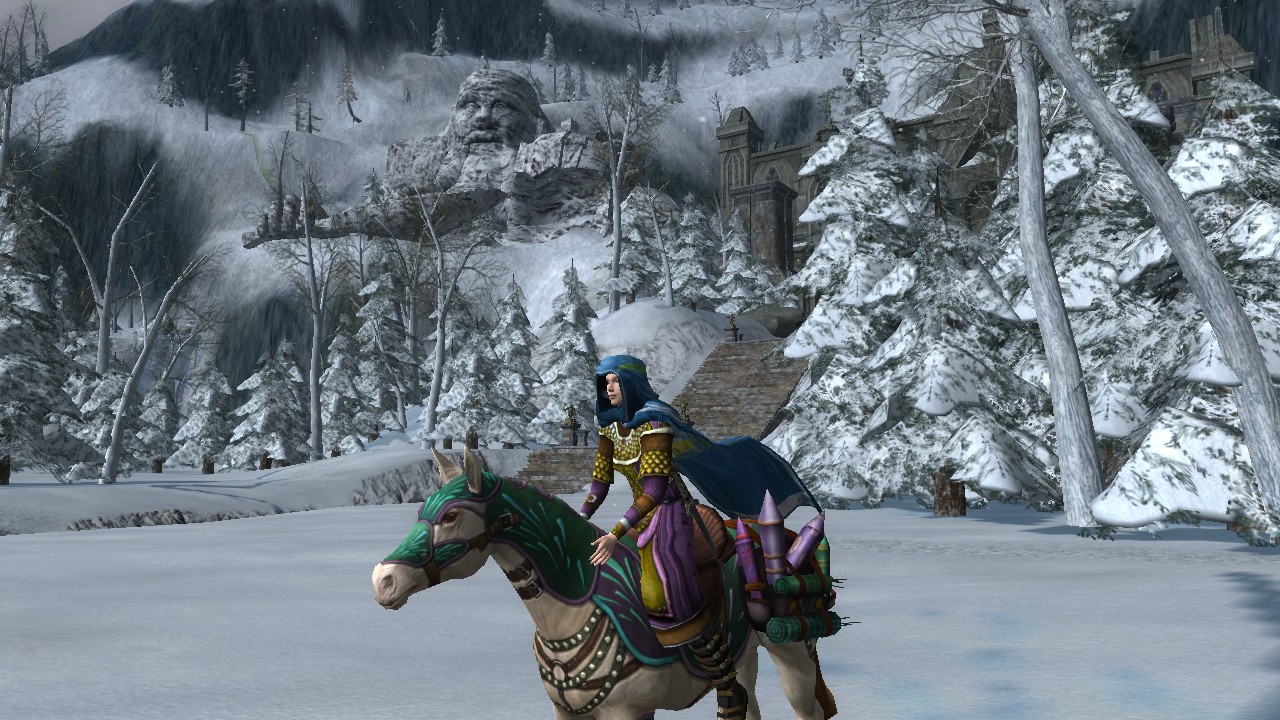 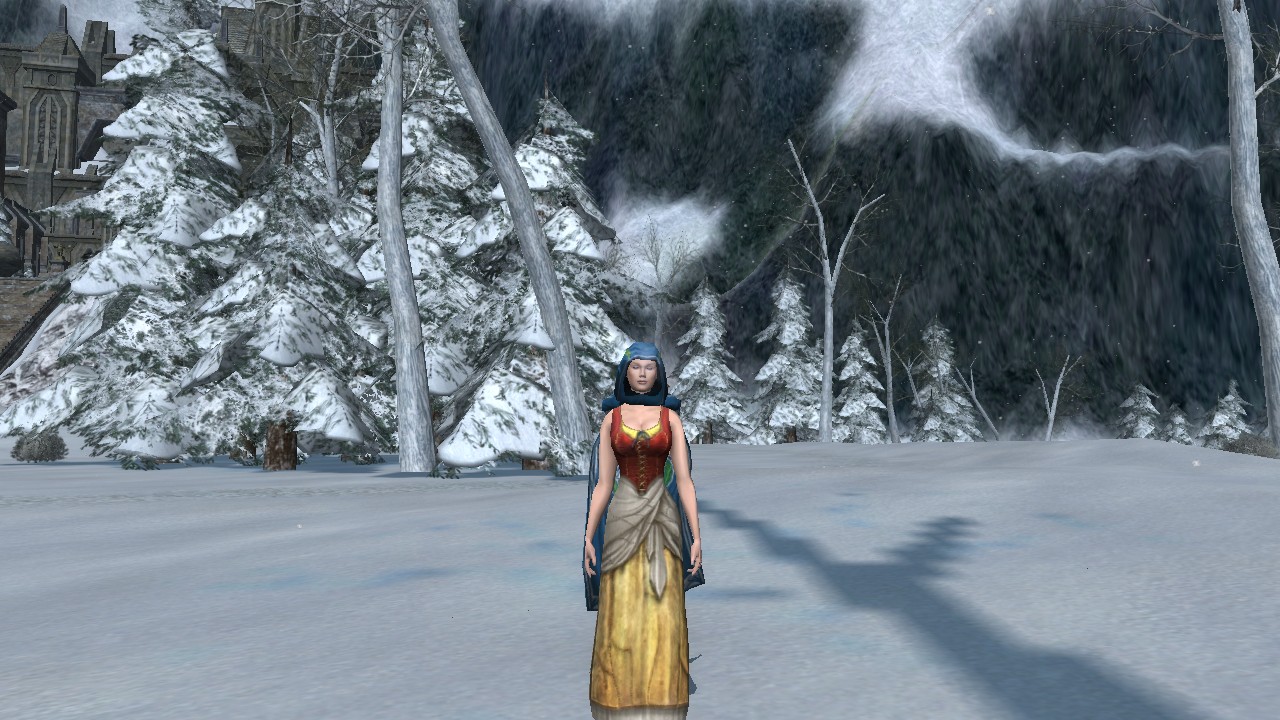 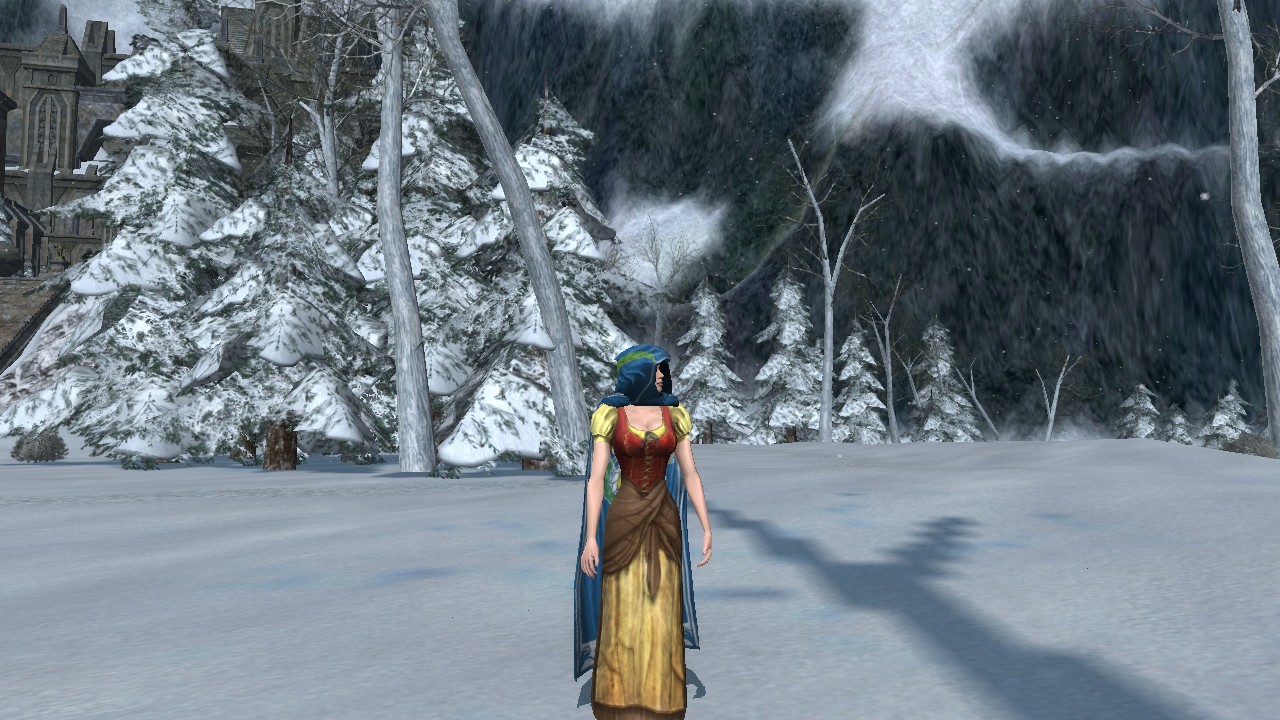 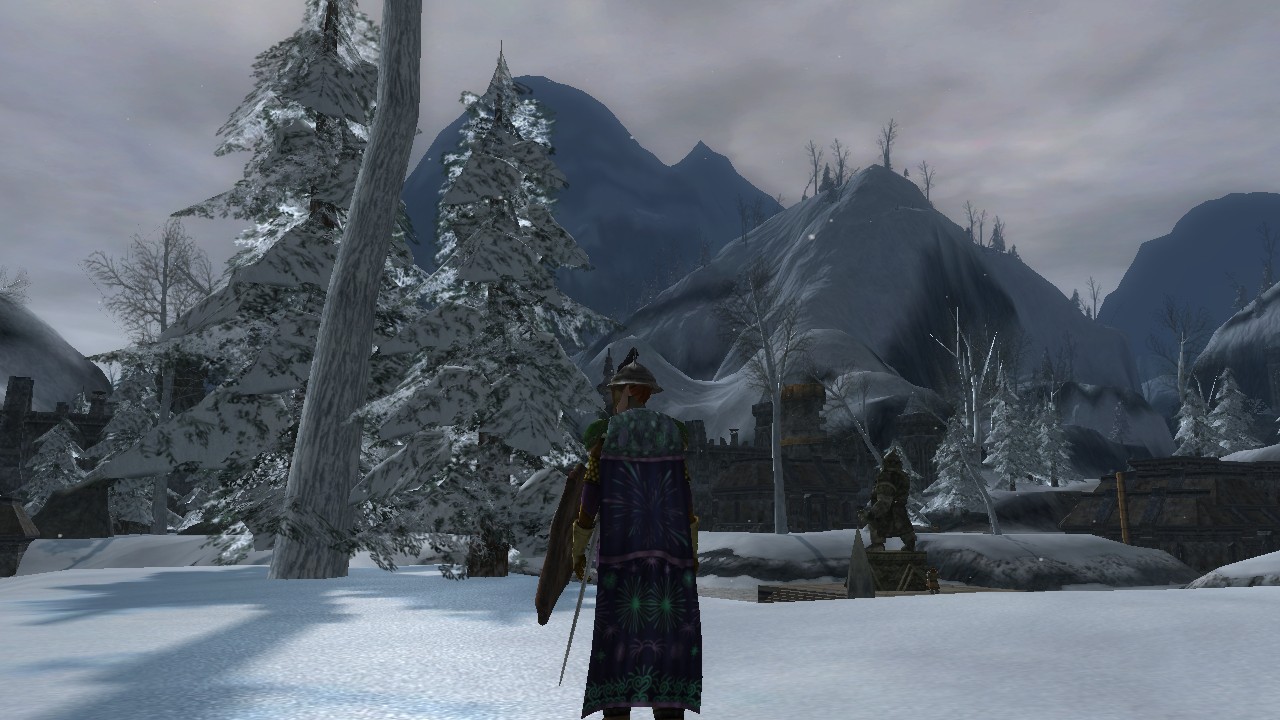 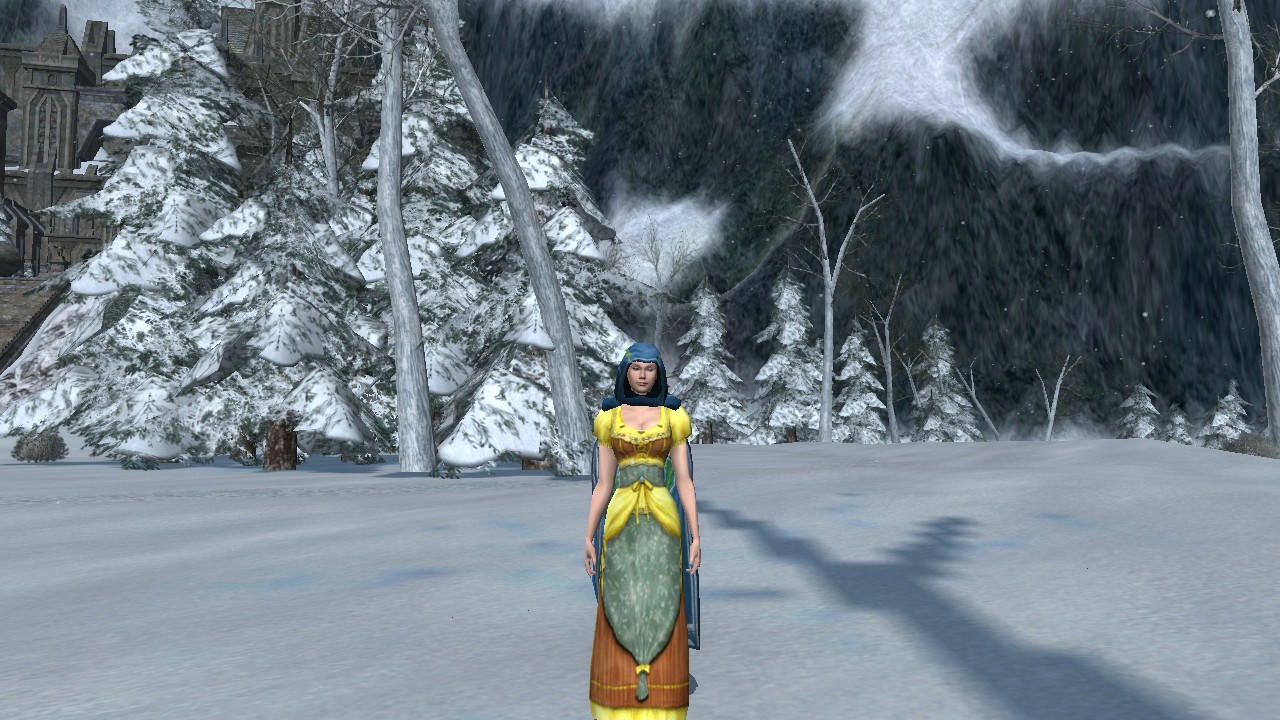 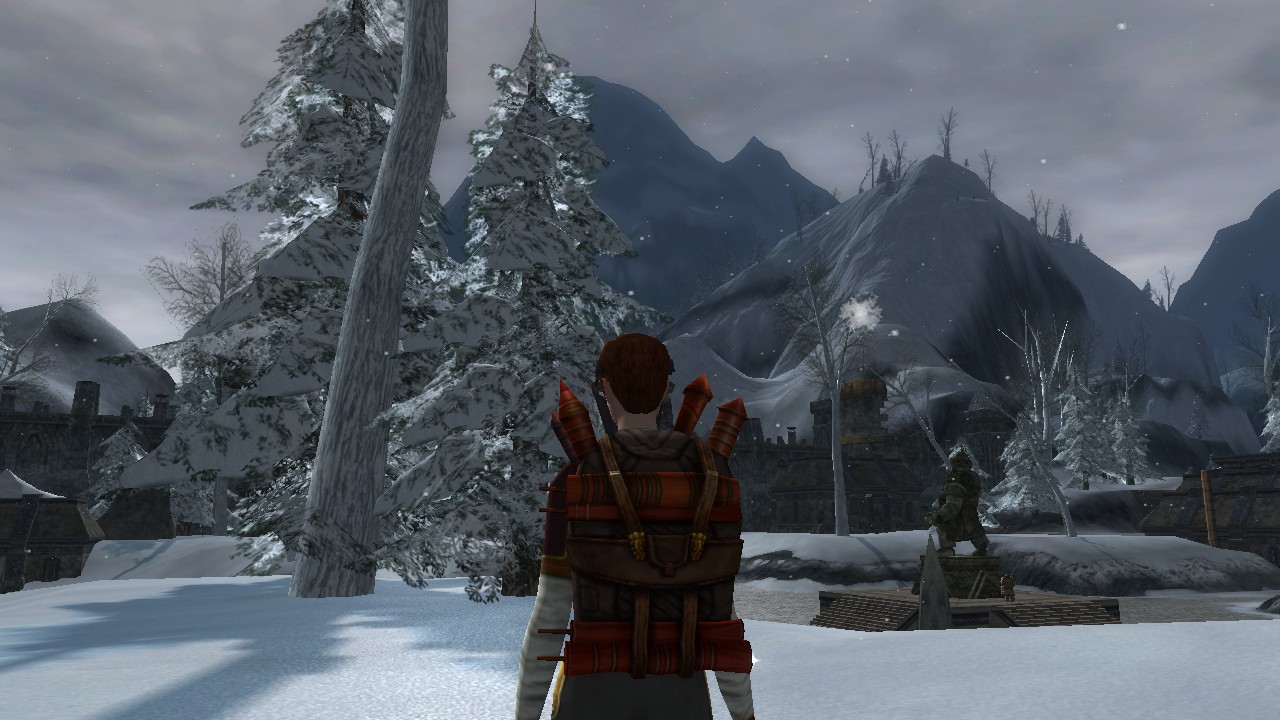 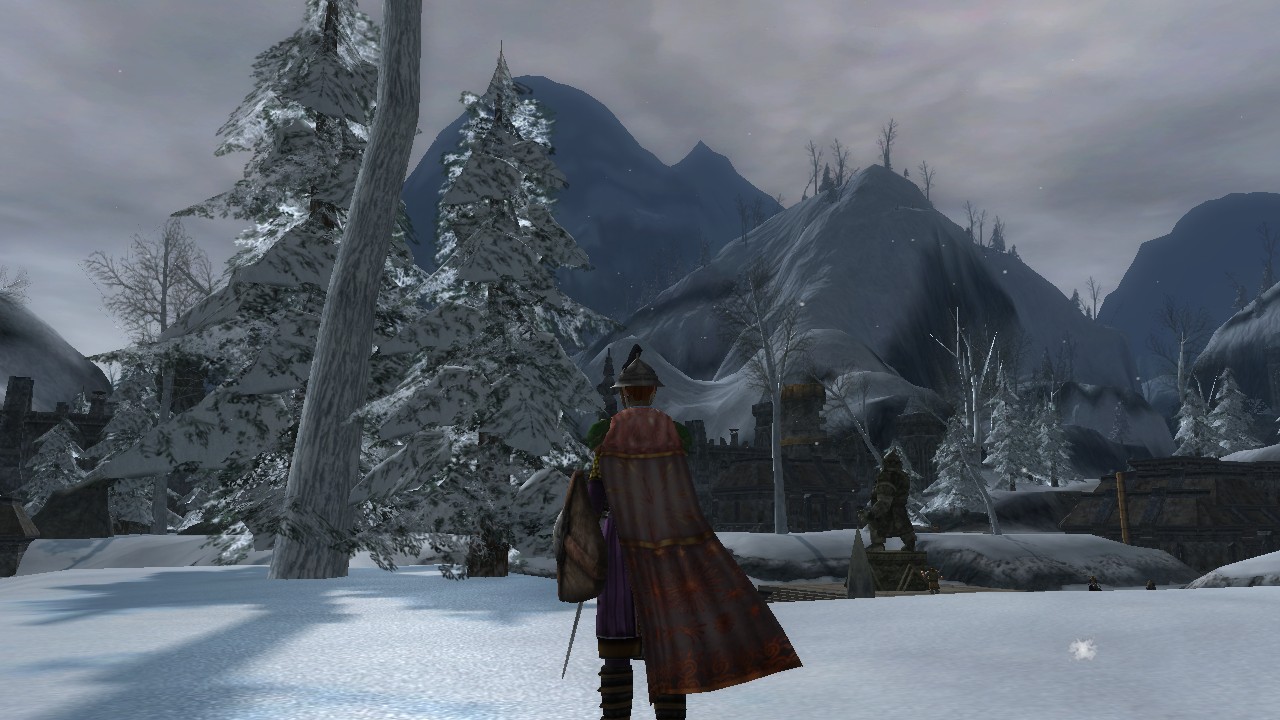 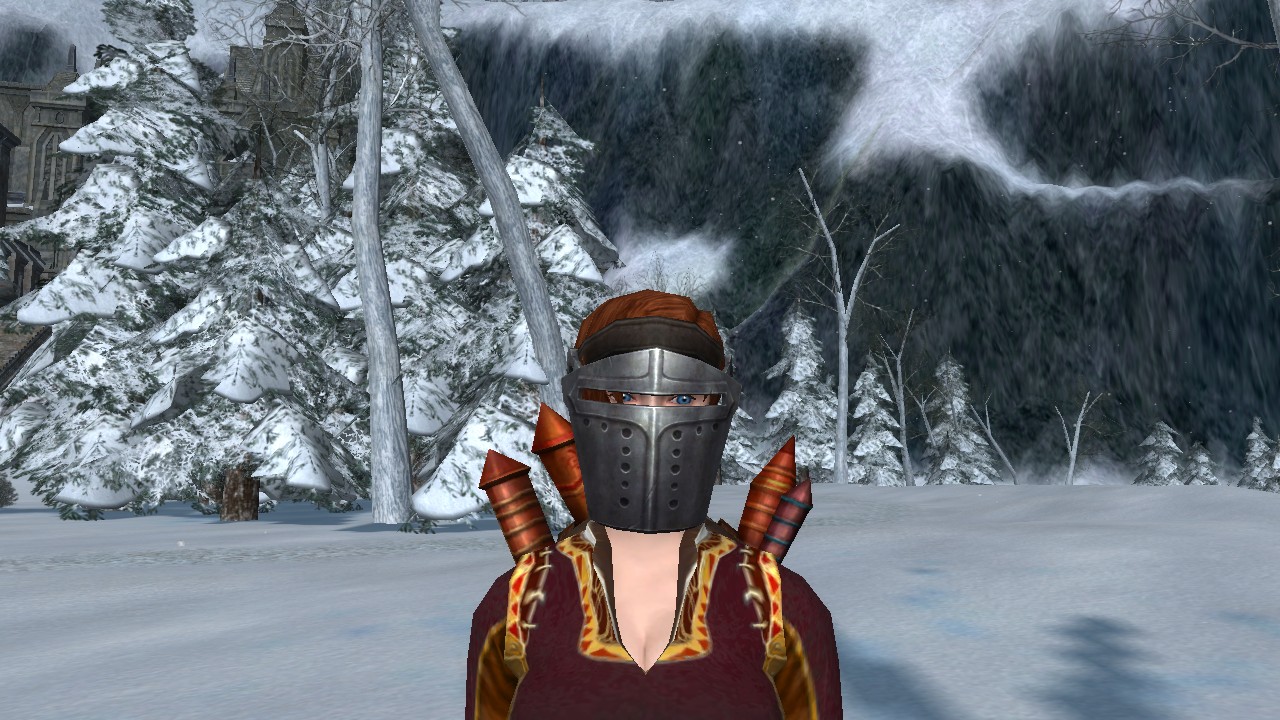 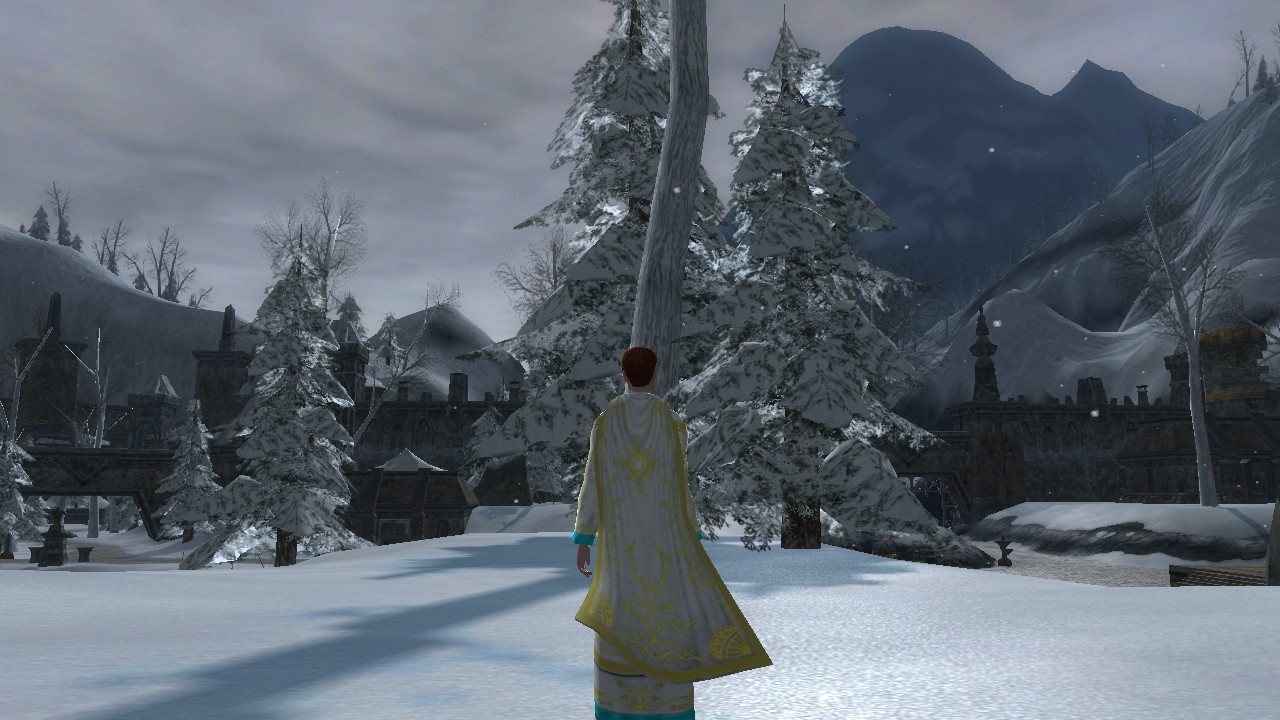 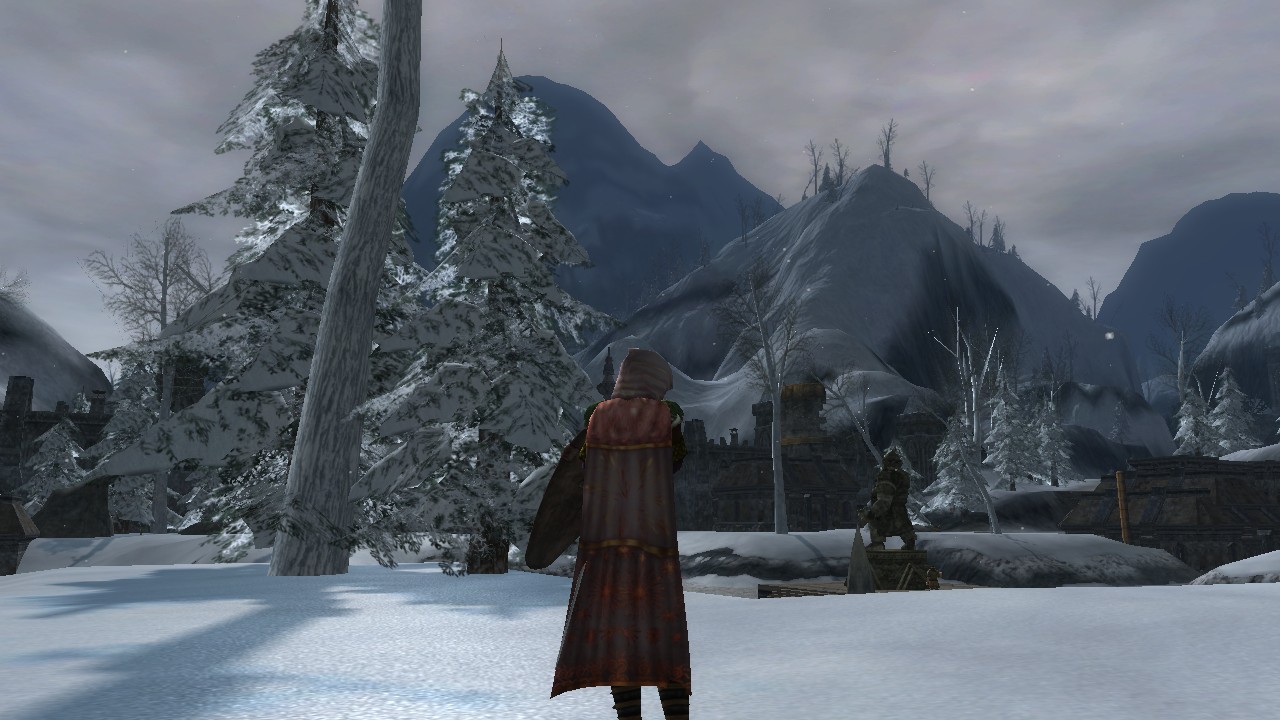 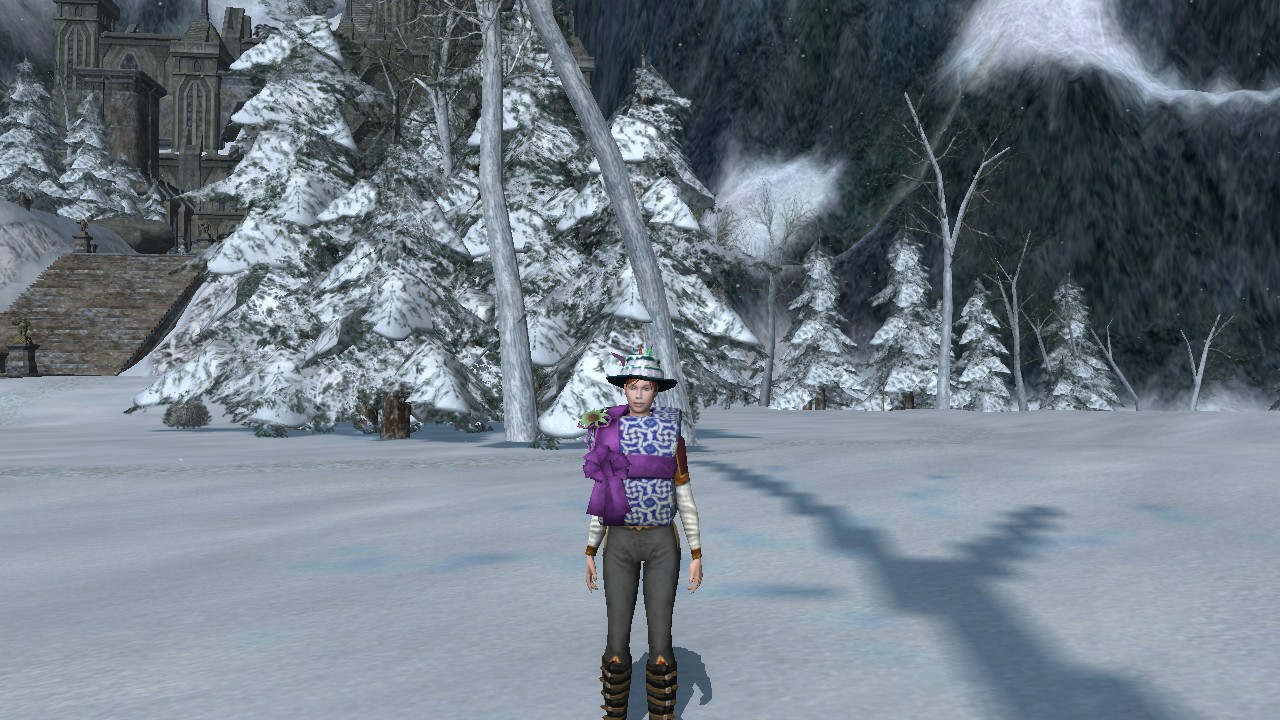 Patterned You In A Box With Decorated Cake Topper Hat 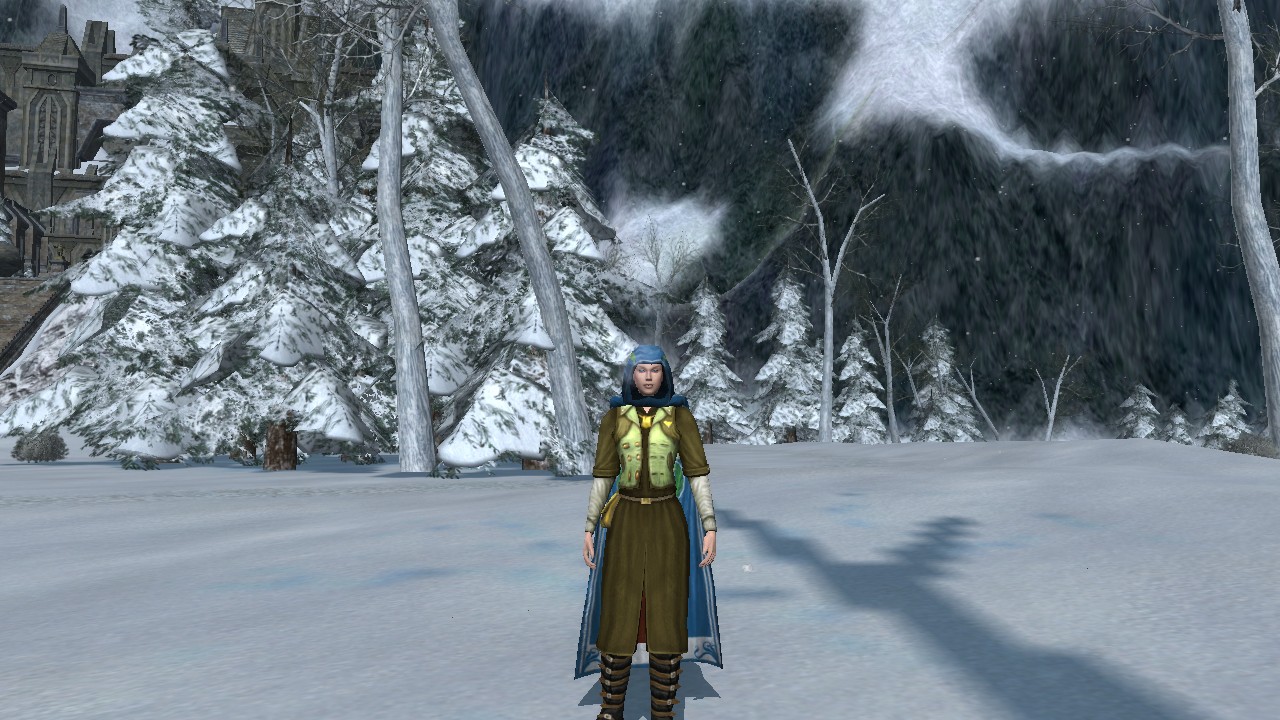 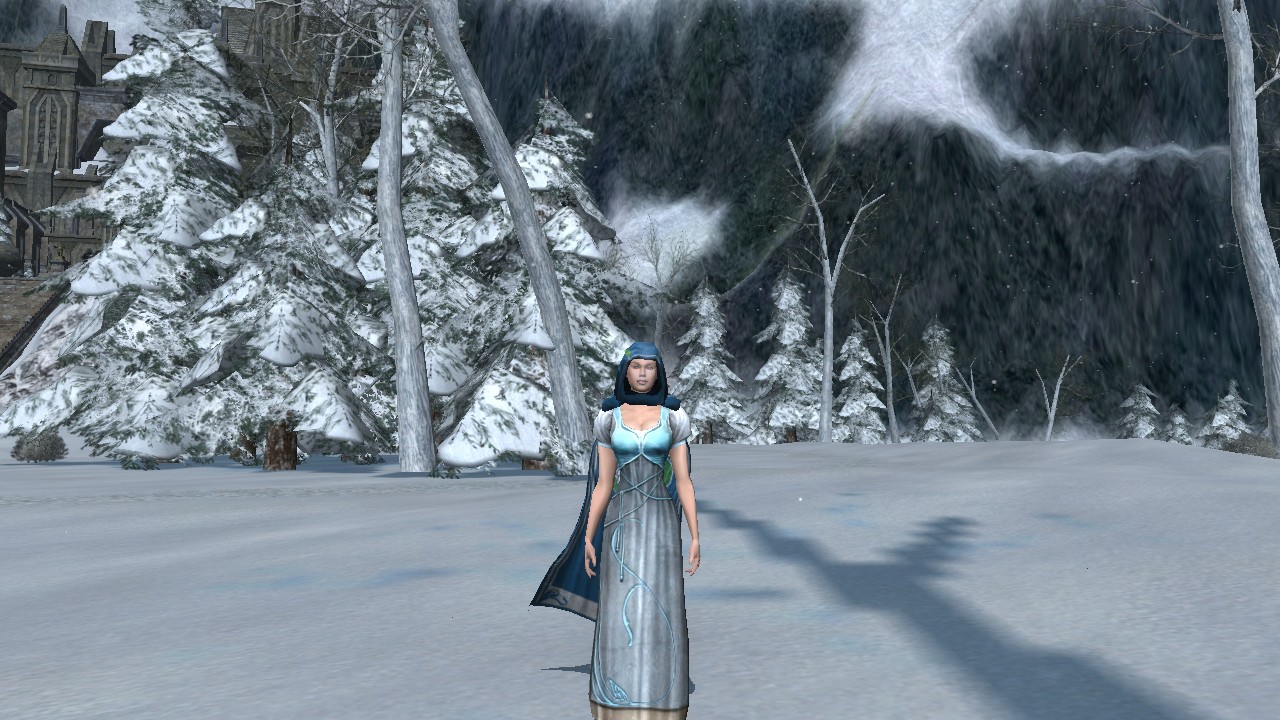 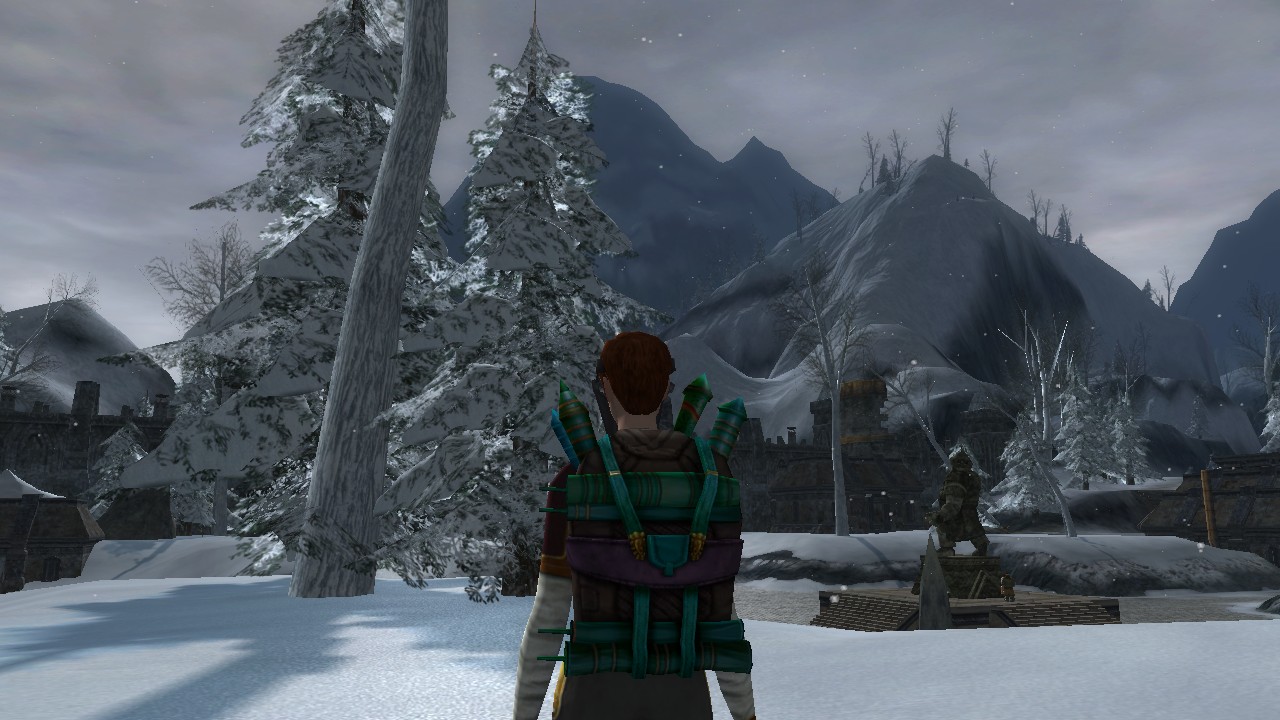 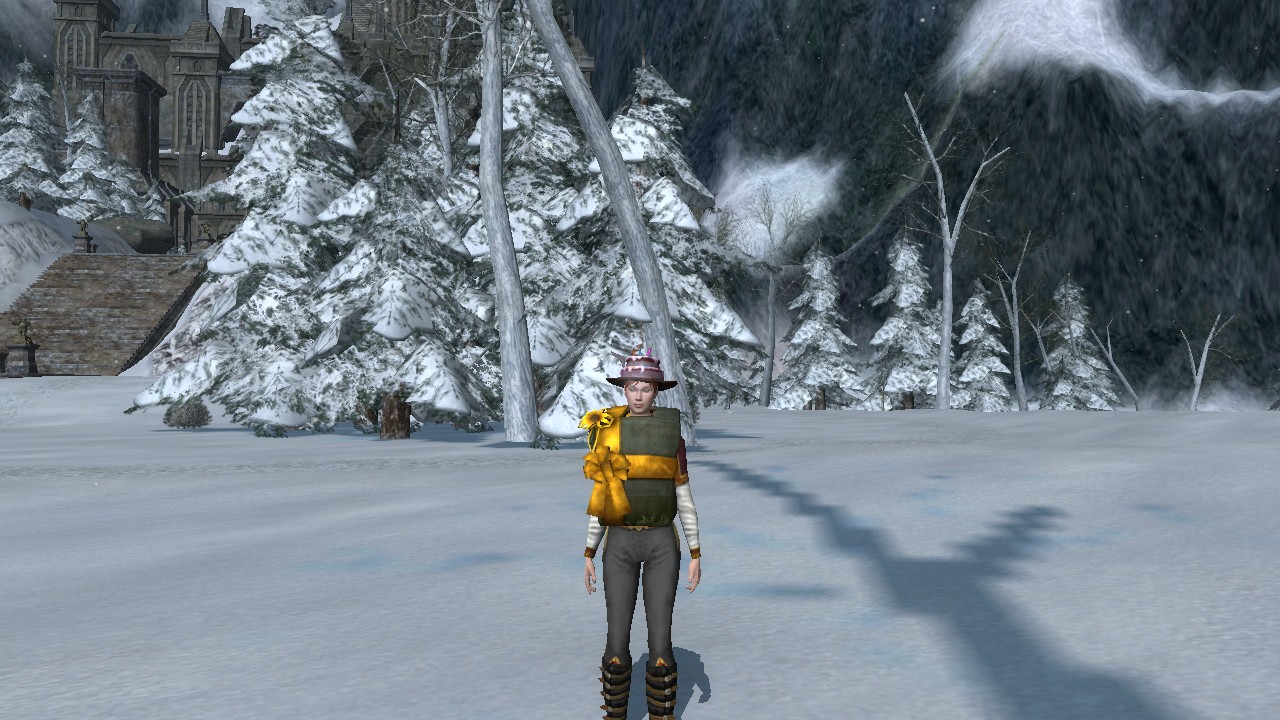 You In A Box With Cake Topper Hat 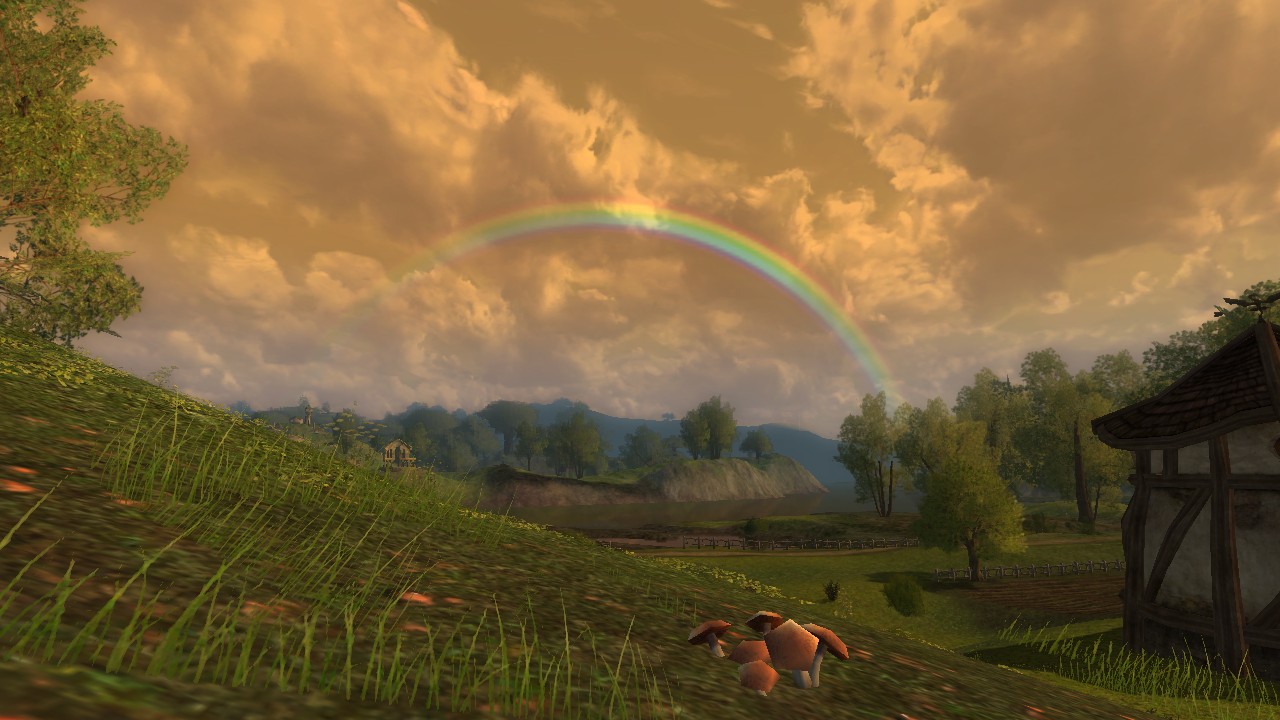 ﻿Rainbow In The Shire From The Viewpoint Of A Chicken
Posted by Unknown at 6:00 PM